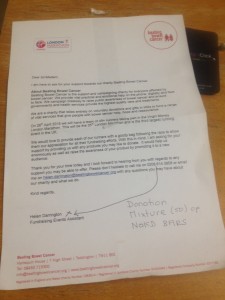 Late last year we were thrilled to be able to support Beating Bowel Cancer with a donation of 50 different Nak’d bars to go into their runners goody bags after this year’s London Marathon.

Beating Bowel Cancer is dedicated to saving lives in the UK and at London Health Foods we were happy to help this great cause by donating to their London Marathon runners. The race takes place on 26th April 2015 and will see thousands of runners from up and down the country set a great time and raise millions of pounds for charities across the world.

The Nak’d bars that we have supplied are a great post run snack, made with natural ingredients and both wheat and dairy free they will provide the energy needed post race. With flavours from berry cherry to apple pie, there really is something for everyone.

Best of luck to all the runners on Sunday 26th April.